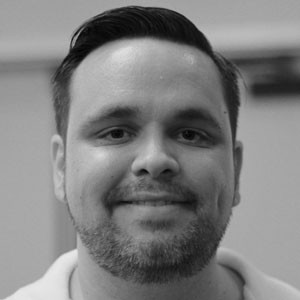 A FUTURE IN FANDOM

While growing up in Indiana, Peter Hackman’s one love was film music.  Film composer agent Richard Kraft affectionately calls him an “über-nerd”.  Peter ventured out to Los Angeles to attend two events that would change his life: Varèse Sarabande Records’ MASSIVE film composer signing in 2008, and Film Score Monthly President Lukas Kendall’s 2nd annual fan gathering in 2009.  Those events marked the first opportunities for Peter to be surrounded by ANY composers or any fellow film music fans, most of whom he had only communicated with through the internet.  In 2010, Lukas wasn’t able to have another fan gathering, so Peter volunteered to pick up where Lukas had left off and started his own event called, Fans Of Film Music, with Lukas’s blessing.  Peter planned everything the first four years while living in Indiana.  He would fly out a few days early, put on the event, and then fly home.  By its 5th year, FFM had become the largest media composer gathering in the world, having attracted almost 60 composers to come speak about their work and sign autographs for their fans from all over the world including China, Canada, Australia, South America, Europe, and numerous states in the U.S..  The now weekend-long event includes composer brunches, parties at composers’ homes like Christopher Young’s, the annual Friday Night Meet & Greet, and extra composer signings.  Plus, scheduling FFM during the same weekend, when John Williams and David Newman perform at the Hollywood Bowl, helps those, who have to fly in, make it worth their investment.

Peter moved out to L.A. in May 2013, and shortly thereafter, Richard Kraft hired Peter to be his data administrator on his Media Musicians Database, the IMDb for musicians and their credits.  Little does Richard know, keeping Peter employed during his first crucial months in L.A. kept him afloat.  Peter will always be eternally grateful for that, and from his work on the MMDb, he has met and gotten to know quite a few amazing L.A. musicians!

A friend at Varèse Sarabande Records mentioned Peter’s name to his boss as they needed someone to help ship their soundtracks out during a busy time in January 2014.  Peter was to work for only two weeks, but Varèse kept giving him more and more to do, and as of January 2015, he is a full-time employee of the company after having been a loyal customer for the past 30 years.  Working at Varèse is a PERFECT fit for someone who loves soundtracks and especially someone who comes from the fan world as he is now giving his advice on projects that he feels the fans want and, most importantly, will buy.  Peter explains, “I never knew all those years of listening to film music, basically my hobby, would help me later on with a job.”

Peter started as a fan in Indiana, and he persevered through a LOT of obstacles along the way which included losing his beloved spouse of 13 years (who is still his best friend), losing his home in Indiana, losing his dog, having garage sales to help fund his Fans Of Film Music events and L.A. trips, and being homeless for a brief moment, but he is now happy living in L.A., working at his dream job and being engaged to composer Edwin Wendler.